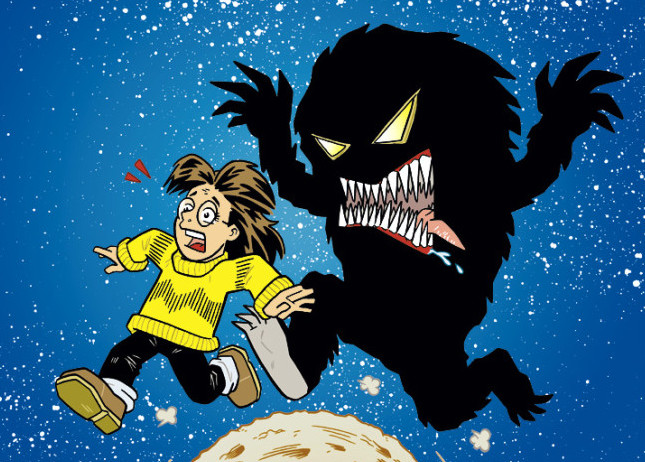 “I thought you were going to print your comic!”

“Why aren’t you writing your barely humorous blogs any more?”

Are these the questions you’ve been itching to ask me, but for one reason or another just haven’t plucked up the courage to thump your quiet query into an available keyboard? (“No”) Don’t worry, I’m here to ask these questions for you!

Let’s recap: this website’s primary purpose was (and is) to promote my graphic novel ‘Mockingbird: Nightmare on Another Planet’ and when I started blogging I was building up to the grand entrance of this potential best seller (“I admire your confidence”) into the marketplace of digital viewership – via Kindle, Comixology, Sequential and the rest of the those pixellated prose providers.

This happened in July 2015 but for some bizarre reason I didn’t see it ascending the literary hit parade, so my order for a new Porsche 911 Carrera 4S had to remain on hold as the buying public decided to ignore the adjective I just kindly used in describing them.

This was of course a harsh lesson gently dealt out by the world of digital comics. I did have a suspicion it was going to be tough, and would probably need significantly more of a push than I could justifiably give it (looking at my busy schedule of climbing trees, reading Thomas the Tank Engine and pooing my nappy – and that’s before we get to the kids!) – and as they say, indifference is worse than a bad review. (I think Oscar Wilde said that. If he didn’t, then I’m claming it.)

As I mentioned in my blog from the past, the comic readership still seem to be a paper reading bunch. They (and I should also add ‘I’) like to have something in their hands, to feel the crisp turn of the page, to inhale the distinctive odour of an even litho print, to place an item on your bedside cabinet to gather inordinate amounts of dust before not being read.

Admittedly the men in tights and well-endowed ladies seem to do well in digital (just cast your eyeball over Comixology’s homepage) and there is a definite online presence of comic creators knocking out screen-based tales to delight all tastes. But interestingly many of these guys and gals will still gather their bits & bytes into a printed version at the end of a story arc or set time frame. This is telling in itself. (“Is it?” Yes, it is. “Really?” Yes.)

As I’ve previously harked on about, comic buyers like to meet comic creators (and I’m sure vice et versa) so it’s essential for hard copies to exist so comic cons aren’t just rows and rows of empty tables with nobody too sure who is selling and who is buying, with the odd black-clothed lounger drawing Wolverine for the umpteenth time to cover his drinks tab for the evening.

This then leads to the question I know you’re going to ask again: “Are you going to print your comic then?” An excellent question, and one I will cover at our next session.

You can get off the couch now. My secretary will book your next appointment.

Oh dear, hasn’t there been a lot of fuss over this Doctorette malarkey?

I guess it was inevitable that once the announcement was made that the new Doctor Who would be played by Jodie Whittaker there would be a huge vocal digestion in the world of social media and them newspaper columns.

For some this is a positive sign that our ever-changing culture is being reflected in popular TV programming, as this seems to be the perfect Venn meeting between feminism and the T part of LGBT. Whereas for others it’s a sure sign of a crumbling society as marginal groups are apparently afforded unchecked influence over our mainstream media’s output.

For me, it’s neither of those two, it’s simply lazy creativity.

Whilst I recognise the cheers or jeers from the various camps are genuine expressions of delight or disdain, as elation or fear is projected back at screen-bathed faces by the winking pixels of a blonde actress – I admit I have no stake in this time travelling horse.

For me, this is about the artistic process and the nature of creativity. Let me explain as briefly as I can as there’s a distinct possibility this is not going to be of any interest to you.

Allow me to present two types of art (get ready for some pretentious and clumsy misuse of art terms).

The first is a form of creativity that responds to and reflects the world and environment in which it is created. This being the concerns or thoughts that inhabit the public consciousness at that point in time, which are then filtered through the artist’s own perspective and musings, to then find an outlet onto the printed page or canvas or other media. Most art falls into this category.

The second is a form of creativity that looks beyond its current circumstances; maybe not even consciously, the artist seeks a form of expression or subject matter that is not currently available within their world. A way of thinking, or an approach to a subject or medium that is not housed within the available public consciousness.

Examples of this are easy to find, particularly in music (The Beatles experimental period, David Bowie’s early work, and a fair few classical composers) and the visual arts of course (Paul Klee, Paul Cezanne, even Banksy – whose first name could also be Paul). I’m sure you can think of several pioneers yourself from the world of comics, cinema, theatre, writing and fashion.

For me, there’s an integrity about the latter approach which may not always be found in the former. And this is where I’m sitting with Doctor Who as a woman.

No doubt there will be fun for the script writers (and hopefully viewers) in exploring the idea of the Doctor as female, but it does have the suspicious smell of being a bit showy, unimaginative and pandering.

The pursuit of truly seeking a creative path ahead for this established and much-loved character seems to have been overtaken by “brave decisions” and self-satisfied back slaps.

I do question the intention and artistic integrity of all this – based on my love for art in all its guises and the basic desire to see creatives pushing towards the future, rather than simply pleasing the present. (There’s your time travel reference!)