“Why on earth has that character got the head of a badger?!” That is a question I’ve heard many many times (twice). And I’m expecting to hear it even more once this crazy graphic novel is released and rockets up The Times bestseller list! (That. Is. Not. A. Joke.)

“Stop avoiding the question, Flicko!” Okay. We’re talking about anthropomorphism, as in, applying human forms or attributes to something which isn’t human. Of course, we all know this has been going on for years!

The ancient Egyptians had their share of animal-headed deities (e.g. jackal, falcon and crocodile), the Hindu pantheon as well (e.g. elephant and monkey) and in centuries past European explorers would often return home with tales of distant lands populated by men with the heads of dogs, even up to the medieval period.

But really it’s from literature and other media that I’ve taken my influence. Whether it’s The Island of Doctor Moreau, Alice in Wonderland, Une Semaine De Bonte, The Magic Finger, Jungle Book (which I hear has been made into an excellent book-of-the-film), Snoopy and any number of animated ‘funny animals’.

But in the early Rupert Bear stories, that’s where I particularly found talking animals to be pretty creepy and disconcerting, yet fascinating, especially as they lived alongside their human counterparts without anyone necessarily commenting, “Er, excuse me, but do you know you have the head of a hamster?”

So that’s my justification, y’honour, for including an evil mad scientist with the head of a badger in my comic! It’s grounded in an established history of literary anthropomorphic acceptance.

It’s handy as well, as it communicates – without words – this is not a normal situation; this is a fantastical world you are entering. I like to think it stimulates curiosity.

And if you’re drawing a black and white comic, a badger is ideal! I know, based on that, he could have been any monochromatic animal. But to be honest, there’s a certain simmering malevolence I was going for that I don’t think a Friesian cow could exactly pull off. Let alone squeeze those udders into a lab coat! I rest my case.

Another selection of images from ‘Mockingbird: Nightmare on Another Planet’, which (as you no doubt already know!) you can read each week, page by page here. Yes, it’s another shocked face from Rossi. What is he getting so worked up about?

Rebel Without Due Cause

As a teenager, when I watched films and TV, read comics and books, I always found myself drawn to the lovable rogue, the misunderstood outsider, the non-conformist, the rebel, the mysterious loner. Characters often portrayed by the likes of James Dean, Paul Newman, Sir Clint Eastwood, Minnie the Minx et cetera.

I even aspired to be like them, I guess because they seemed ‘pretty cool’.

But, as I grew older, I quickly realised maintaining a rogue-ish persona actually ended up creating distance in relationships. And frankly, I couldn’t keep up the uninterested smouldering pose when I was genuinely upset and someone would ask, “What’s up, chum?” Inevitably I would crack and break down explaining how I’d left my Tricoloure textbook at home and French was our next lesson and that my Dad would kill me if he knew I’d scratched my new bike, which I shouldn’t have been riding as it wasn’t my actual birthday till Monday! The sort of issues I’m sure Pete ‘Maverick’ Mitchell would have identified with.

Admittedly in real life, if someone is held-in emotionally and can’t open up in relationships it’s generally because of some real hurt and pain from their past, rather than a pretend identity they’ve picked off the shelf because it’s ‘pretty cool’.

Nowadays I’m quite happy to be the opposite of a mistrusted maverick. (What would that be? A trusted team player?) I kinda’ feel sorry for characters like Wolverine or Batman. It seems until they can find some peace with their past they can never really mature as people.

I know, I know, they’re not real and I understand a popular fictional character in an ongoing series can’t ever really change, particularly when their audience appeal is so closely linked to their inner turmoil being maintained. (Which is a strange concept when you think about it – I KNOW, they’re not real people! But hey, Peter Andre is.)

Anyway, we can talk more about this subject another time, if you like. Peter Andre, that is.

P.S. Apologies to anyone who is not a teenager but still aspires to be like Wolverine. Let me know how it’s going.

I’ve grown a moustache for INKtober. If you’d like to sponsor me then keep reading.

INKtober is, of course, a time to celebrate the art of inking and an opportunity to display our wonderful illustrative pieces to a watching world, BUT it is also a time to remember those less fortunate than ourselves. Those who don’t possess the skill and artful finesse of others. That’s why this month I’m raising vital funds for less-talented comic artists.

Particularly during October these sorry creatures can’t even glance at Twitter or Facebook without being bitterly reminded about their own lack of drawing ability. Please spare them a thought.

This condition affects far more people than you may realise. Even now you could be sitting next to someone who has no artistic talent!

You yourself may even be a less-talented comic artist. If you’re not sure or you’re too embarrassed to ask, here is a helpful list of common symptoms that sadly afflict these miserable individuals:

So please join me in raising much-needed awareness for this debilitating weight that burdens our fellow men (and the odd woman), especially at this time of year when their self-worth can be so easily bludgeoned whilst the rest of us make merry.

To view some of their well-meaning (but pitiful) visual attempts click here.

If you’d like to donate to this un/necessary* cause, you may do so here.

Thank you for inking.

I hope you’re well. I know it’s been a while, I’m sorry I’ve not been in touch.

I hear your family has got a lot bigger since we last saw each other! It really has been a few years, hasn’t it?

I imagine you’ve changed, I know I have. It’s amazing thinking how much we used to have in common. We both had our geeky glasses wearing years, we both went through stages of wearing black all the time, even our luck with the ladies wasn’t dissimilar! I remember we both liked blondes, didn’t we? (Though none of my girlfriends died, or were cloned – as far as I know).

Are you still seeing the old crowd? Octavius, Norman, Eddie, Flint? I appreciate it’s hard to let some of them go, especially when they’re not great hanging out with other people. They’re kinda’ dependent on you, aren’t they? You’re their centre, really. I admit you were for me too, back then.

I used to look up to you a lot, like an older brother, I guess. I couldn’t wait to hear your stories and latest adventures. The genuine excitement and anticipation I used to feel, knowing we’d be meeting up. I do miss some of that magic.

But things change. I understand, for you, when you got married the focus changed, didn’t it? Responsibility and all that. To be fair, it’s unrealistic to expect things to stay exactly the same once you’re married. It just doesn’t sit right if you try to keep doing what was accepted in the past, when the present is no longer the same. I hope that’s working out for you, mate.

Anyway, maybe we’ll catch up soon. Feel free to swing by if you’re ever in the neighbourhood. I know you’re a popular fella, so no pressure, especially as I see you’ve got a whole lot of new friends since we last hung out. That’s cool. Nothing stays the same does it?

Give my love to your aunt.

I once tried my hand at gently whimsical humour (as opposed to my usual darkly nihilistic approach) with mixed results (for ‘mixed results’ read ‘no results’).  But anyway, here are a selection of those speculative one-spot cartoons, heavily influenced by the master of British whimsy, Nicolas Bentley. 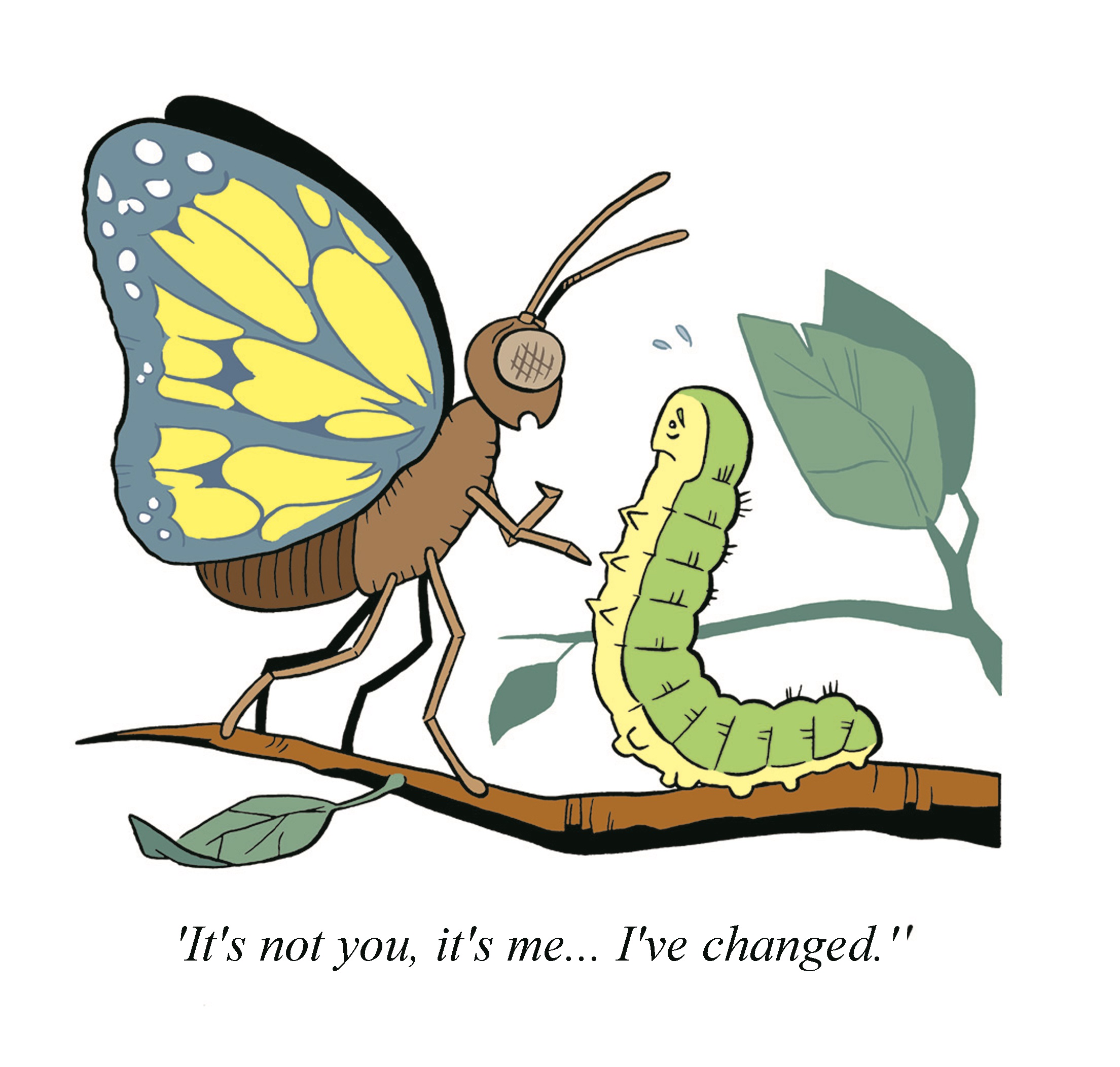 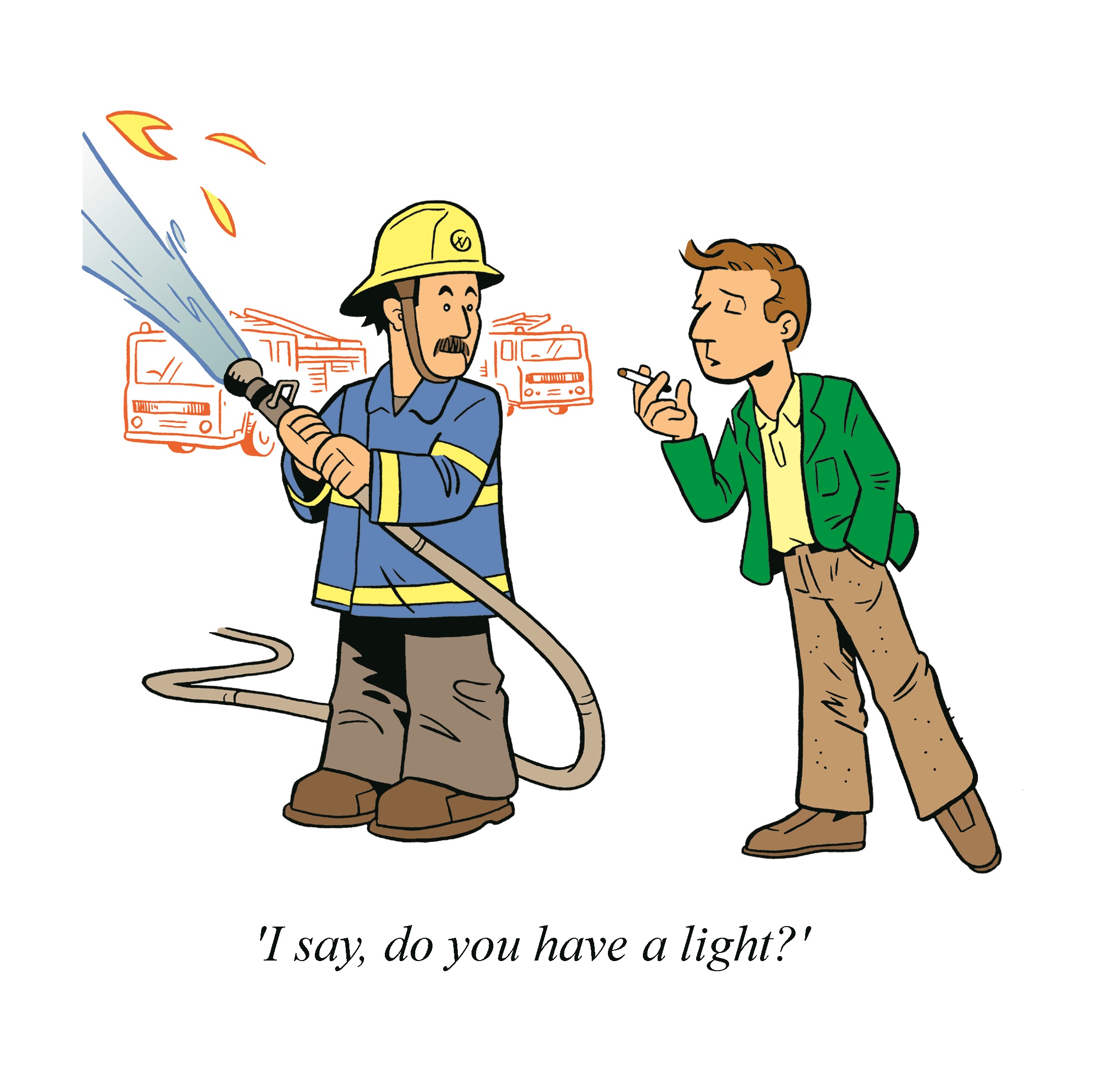 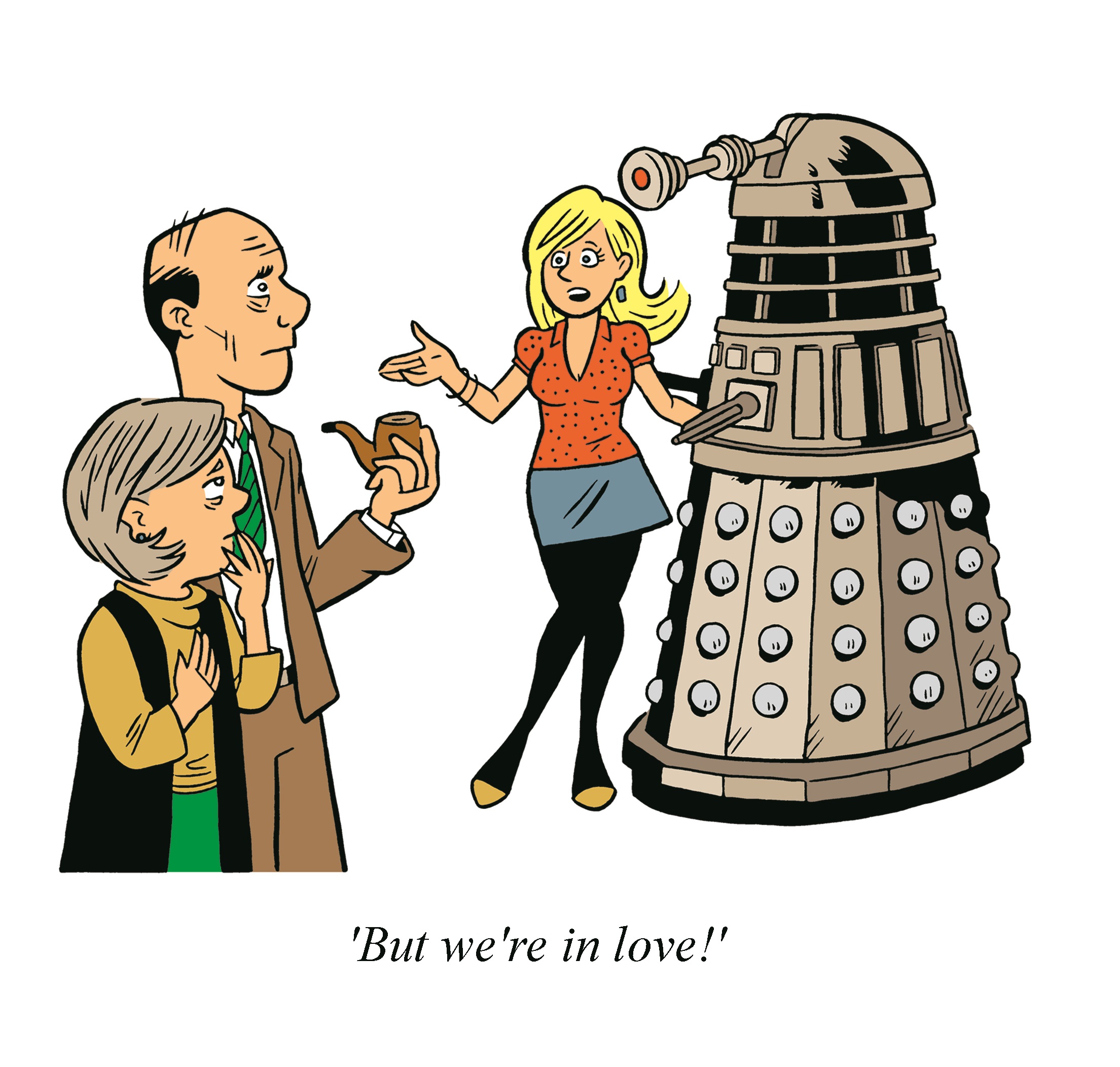 (For any Whovians out there, feel free to point out my visual error with the Dalek.)

I don’t recall the content of what was being spoken but I do recall I was doodling. As I would often do, particularly in church meetings. But on this occasion, 22 years ago, this doodle was the start of something, the start of the greatest story ever told… sorry, I’m probably over stating the significance of this, possibly portentous, scrawl.

Basically I drew a woman, in sci-fi garb holding a ray gun! Being a big Ian Gibson fan (or more specifically Halo Jones) I was clearly drawn to women of the future! Pun intended. But it, I mean ‘she’, was soonly shaped and reworked into the character who would later become Diana; after a change of ethnicity and choice of weapon.

Looking back, I like to think the essence was there, of what-was-to-come, even in that initial little scrappy doodle. Or scooby doodle (sorry). Either way, it was a start, a beginning, a minor epiphany in a Sixth Form common room. (As Jarvis Cocker might say.)

Previews of Previews I 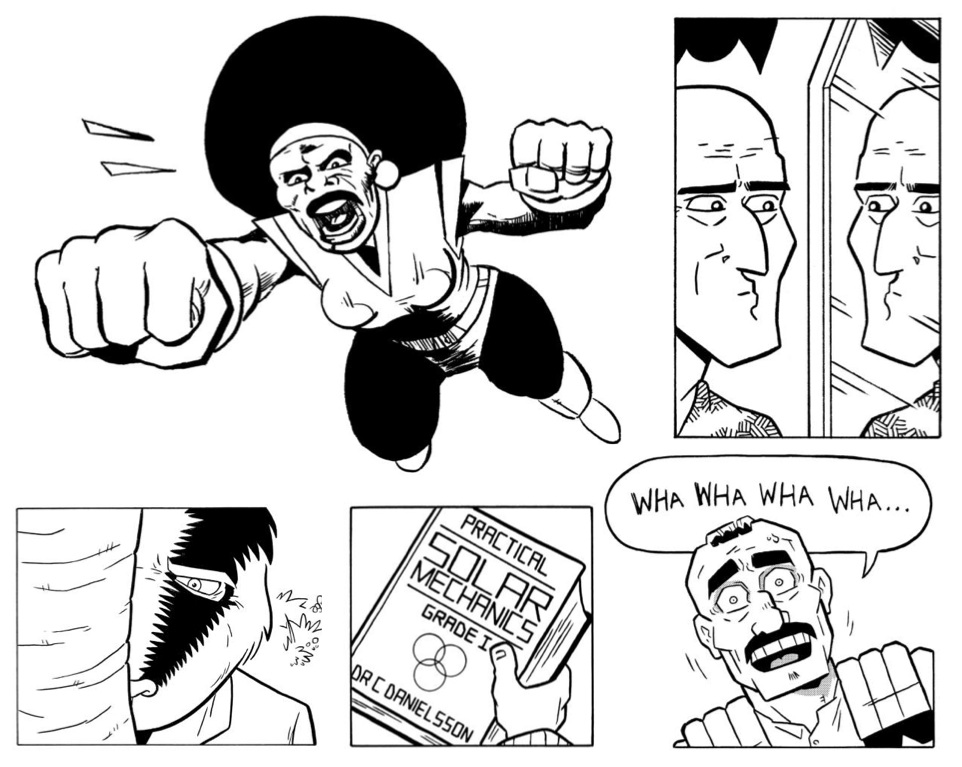 Lookee, here are some images from upcoming pages in the exciting and marvelique ‘Mockingbird: Nightmare on Another Planet’. To be fair though, at the rate of one page a week, it might be a year or two before you actually see the pages these drawings are from. Soz, everyone.