Too Big For His Boots 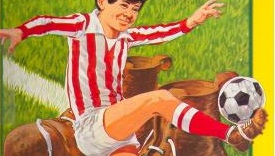 When I was younger those were the words that introduced Billy’s Boots; a weekly comic strip about a kid whose magic boots allowed him to play football like a school boy Messi, when without the boots he really played like a messy school boy!

(Sorry, I wanted to use the Messi/messy gag, so forced it in there anyway.)

Basically, Billy’s life was a deception! He was living a lie. He was a rubbish player but here he was presenting himself as a footballing maestro. A charlatan in muddy shorts! It was the boots that did all the work.

Also didn’t he ever consider that his feet would one day outgrow his fabulous footwear? And what then? “Hey, didn’t Billy Dane used to be a great footballer? What happened? He had such potential.”

This also raises the question of how tiny were Dead Shot Keen’s feet?! A grown man with feet so small that a twelve year old boy could easily wear his boots? He must have looked a bit top heavy.

But maybe I’ve got it all wrong. Maybe Billy’s the classic unreliable narrator and the genius boots are actually a form of denial. He has known loss in his young life; he’s an orphan and lives with his nan (who is ALWAYS losing his boots or taking them to Oxfam every other week). Maybe he doesn’t dare believe he is brill at footie, maybe it’s easier to say it’s the talented trainers. It hurts less if things don’t work out then.

Plus, saying you have magic boots means you don’t ever have to turn up for training – at half six on a cold and wet Sunday morning!

Or maybe this is all about the transient nature of childhood, and how precious it is to enjoy playing football with your chums while the days are still long and innocent – though the dark clouds slowly rise above the south stand; a reminder that one day adulthood and obligation will catch up with you (once the ‘magic boots’ no longer fit).

After all, Billy is clearly going to be his nan’s main carer by the time he’s in his mid-twenties. Responsibilty can’t be avoided forever.

I think I’ve been too hard on the little fella. Okay, live your fantasy, Billy Dane, enjoy those ‘magic boots’, before reality eventually kicks in.*