I’ll be honest with you, I’m not a big fan of Marvel’s Inhumans.

I recall the Fantastic Four had a fair few encounters with them, and I remember really enjoying that excellent story when Triton popped into the Negative Zone to rescue Mr Fantastic (“Not so fantastic now, eh?” I think he uttered).

I also liked the idea of Crystal as Johnny Storm’s girlfriend. But then I’m always a fan of temporary team changes (especially when they aren’t simply about increasing sales.)

And Black Bolt’s power of talking loudly is kinda’ fun, in that he can’t even mutter under his breath without knocking out someone’s eardrums or causing a child’s Lego tower to crumble (“Now THAT was a waste of a Saturday afternoon!”). I’m sure it’s a bit of a pain for him too. I hear he likes Lego.

The fact that Maximus relies on his intellect and influence without particularly showy super powers, yet seems to be their main adversary is also intriguing.

But now there’s a telly show all about them, so I thought I’d show you some of my Inhuman doodles. And by ‘inhuman’ I don’t mean my drawing style, I mean…. oh, you know what I mean.

(For the unfamiliar this is Crystal, Maximus, Black Bolt and Medusa.) 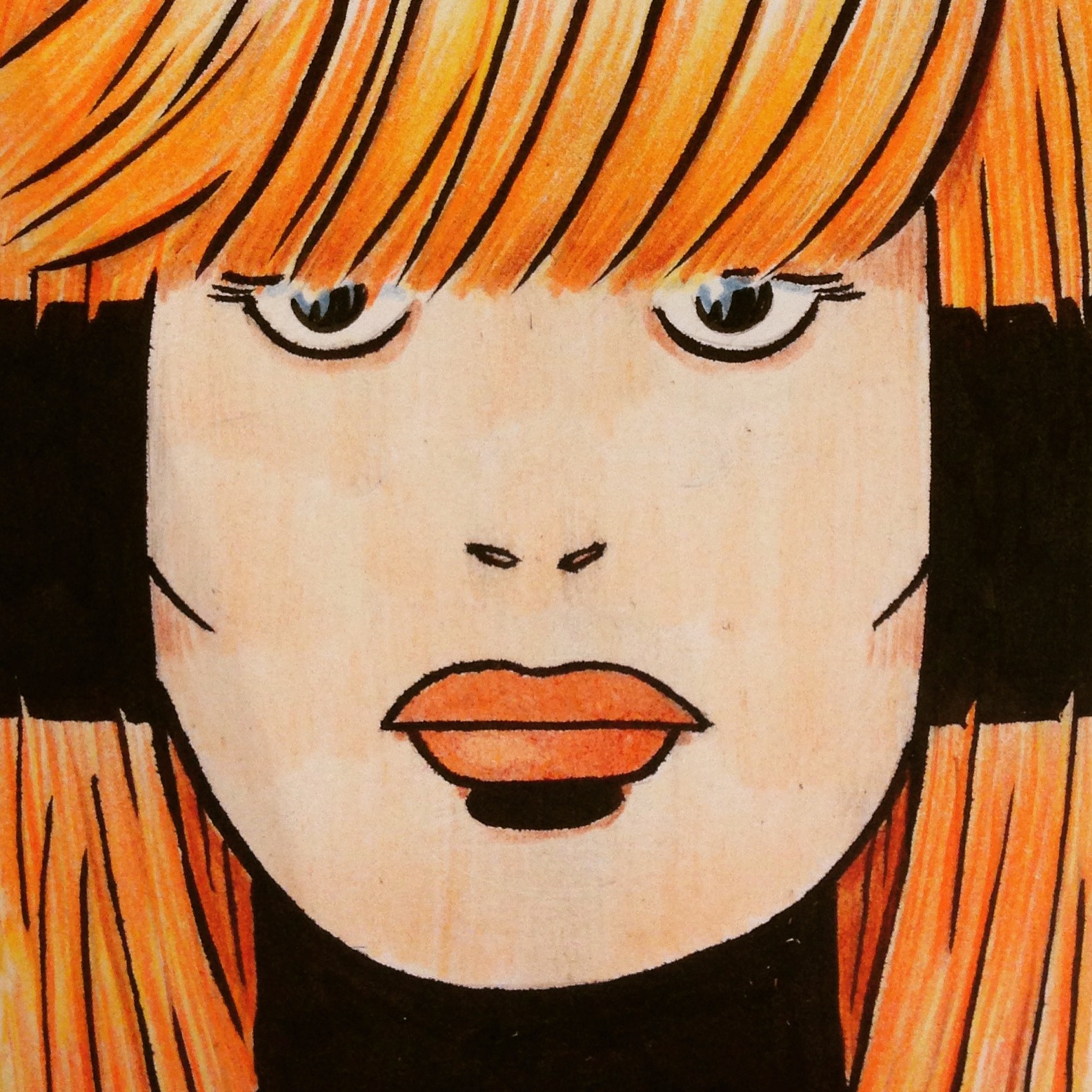 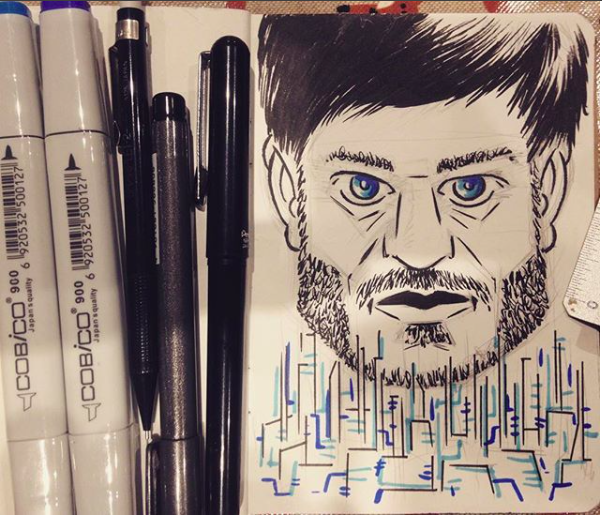 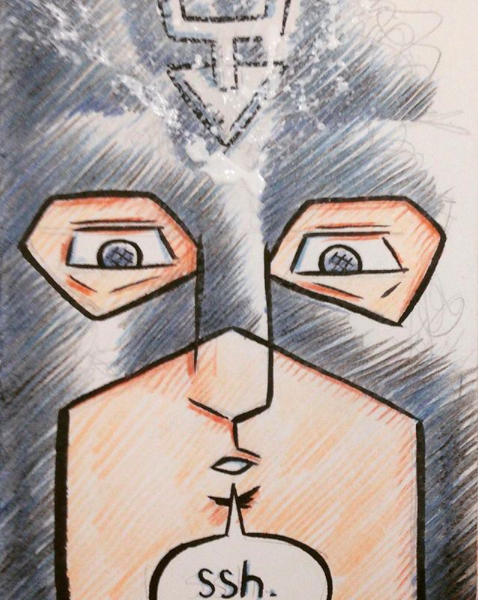 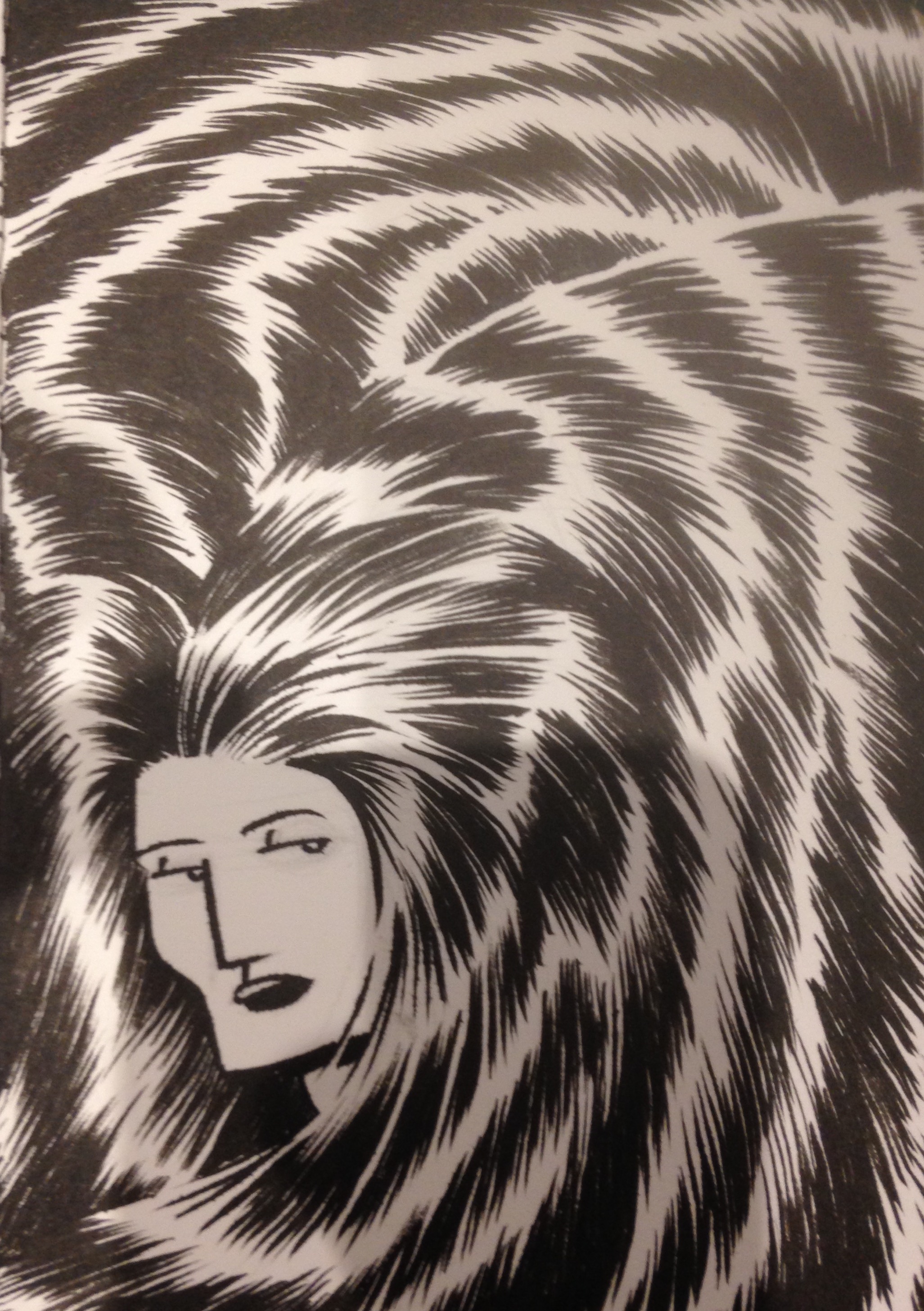 If you’d like to see more drawings feel free to do the click thing here or here. No presh. 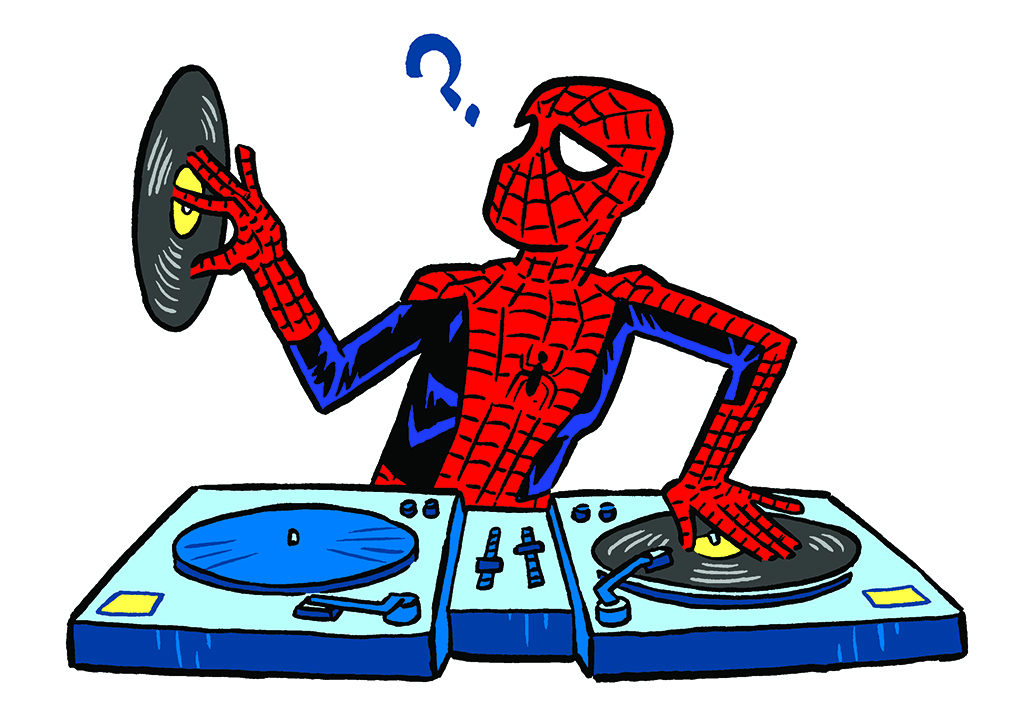 Haven’t you always wondered what might be on Spidey’s playlist, as he’s swinging across the rooftops of New York New York city?

But here I was, considering this most banal of questions about a fictional fellow and his iPod selection, to such an extent that I ended up collecting together a catalogue of canorous compositions relating to this theme.

From this it seemed obvious to compile these into a Top Ten of tunes that our friendly neighbourhood Spider-guy would NO DOUBT listen to. My main assumption being that because he possesses a great sense of humour (much like someone else round ‘ere) he would love a good pun or at least a salt shake of irony.

The only self-imposed criteria for this array of fine audio choices, was that the title had to relate to ol’ webhead in some way.

I’ve conveniently provided links to the songs in question, so you know these are all gen-u-ine ditties. No need to thank me.

I’ve also annotated the list in an attempt to be helpful, but feel free to put your hand up if you’re confused, or if you need the toilet.

They’re in no particular order, other than vaguely chronological. So allow me to share my musical musings with you.

(Do let me know in the comments section if I’ve missed any titles you think should clearly be represented!)

1 Bite the Hand  (ABC)
Cos like, he got bit by a radioactive spider, didn’t he?

2 Boogie Woogie Bugle Boy  (The Andrews Sisters)
Cos like, he works for a newspaper called the Daily Bugle. Geddit?

4 Life through a Lens  (Robbie Williams)
I’m not going to explain this one.

5 Mary Jane  (Rick James)
Some people suggest Mr James is not actually singing about a pretty lady, but is referring to ‘other stuff’. I don’t see it, to be honest. Anyway, Peter Parker fancies a girl called this. Mary Jane that is, not Other Stuff. That’d be weird.

6 Dancing on the Ceiling  (Lionel Ritchie)
You know what spiders are like… they dance… on the ceiling… when I try to catch them.

7 Man in Black  (Johnny Cash)
Cos like, he wore a black costume, remember?

8 I’ll Stick Around  (Foo Fighters)
You know what spiders are like… they stick… around… dancing on the ceiling.

9 Life of Riley  (Lightning Seeds)
One for the comic readers and what was known as the Clown Saga, or something like that.

10 Oldest Swinger in Town  (Fred Wedlock)
Cos like, he swings on his web, and he’s been doing it a while, hasn’t he? Hasn’t he?!

BONUS TRACK: Back to Black  (Amy Winehouse)
Another one for the comic readers. When Spidey no longer wore the alien black costume, he donned a cotton version for a while. So like, he went ‘back to black’. Y’welcome.

Phew, if you’ve made it to the bottom of the list: CONGRATULATIONS. And you might also be interested in another rambling piece I wrote about our web-headed wonder right here. Many reviewers have claimed this article is both “hilarious and poignant in equal measure”*. 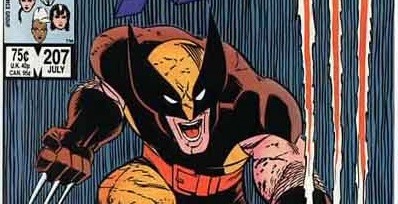 I trust this letter finds you in good health.

It has been a few years, I admit. Time stands still for no one, as they say!

How are your anger management issues now? (If that question doesn’t cause you to fly off the handle!)

Do you remember, you used to be so mad and full of rage, such a temper, like a tiny seething time bomb of bristles, that stank of cigarettes? You were like an animal! (If there’s an animal that smokes half chewed cigars.)

To be honest it was kinda’ sad, as if your angst defined your identity so much you didn’t know who you were anymore.

I’m not dismissing your past, mate, I know you’ve been treated badly, betrayed, ripped apart. It’s just feels a little bleak as I know you had so many friends who seemed to genuinely care about you and look up to you. It’s a shame the love, companionship and community of your mates and ex-mates didn’t seem to factor into your healing process.

I always thought maybe you just needed a hug. Not that I was going to try! I left that to one of your many female admirers – who worryingly all seemed to be a lot younger than you!

You certainly were popular though! Everyone wanted you at their party, to be seen with you, everyone wanted to be like you. Well, maybe not the hair.

I recall you were pretty adamant about that haircut. Actually you were just adamant all over, weren’t you?

But joking aside, there is something serious we need to discuss. I think the thing that disturbs me most, the thing that truly upsets me is that you used to be a role model for guys like me (well, maybe not the smoking) – no, you were one of my heroes because you were short! What changed? Now whenever I see you around you’re like over six feet tall! Where did THAT growth spurt come from?!

And what’s with the Australian accent? I don’t know who you are anymore.

“Join the club, bub” I’m sure you’d say, “And stick another moose rib on the barbie.”

Kindest regards, I look forward to seeing you again soon.

First of all, let me say a massive congratulations! What has gone on with you in recent years? Everybody loves you! It’s like you’re a different person! When I knew you, all those years ago, you were like the boring one in the group (no offence).

I think part of the issue was that the buddies you assembled round you were far more interesting and exciting than you (no offence). Actually are you still friends with that annoyingly patriotic kid, the blonde one? You two were inseparable; like two peas in a beige pod.

But look, I’m only saying this because the change in you really is marvellous. It’s like you’ve let the mask down and the guy inside is actually far more entertaining than any of us ever guessed. You used to be so grey, but now you’re golden!

I do remember you at parties, knocking back the tinnies, I guess you came out of your shell then. I hope that didn’t get out of control, mate. To be honest, some of us were a bit concerned at the time and considered holding an intervention for you at one point. Not because of the alcohol consumption, but for being so boring (no offence)!

Okay, I admit, you did tell the odd inventive story here and there, but generally the suspense killed us in most of your tales.

None of that matters now, eh? If you’ve maintained your capitalist outlook I assume you’re still pretty loaded – and with your new found popularity you must be feeling invincible! Unless you’ve still got your heart condition, in which case, I apologise.

Anyway, let me know if you fancy going to the cinema sometime, I know a few of my mates who’d be keen to join us.

I hope you’re well. I know it’s been a while, I’m sorry I’ve not been in touch.

I hear your family has got a lot bigger since we last saw each other! It really has been a few years, hasn’t it?

I imagine you’ve changed, I know I have. It’s amazing thinking how much we used to have in common. We both had our geeky glasses wearing years, we both went through stages of wearing black all the time, even our luck with the ladies wasn’t dissimilar! I remember we both liked blondes, didn’t we? (Though none of my girlfriends died, or were cloned – as far as I know).

Are you still seeing the old crowd? Octavius, Norman, Eddie, Flint? I appreciate it’s hard to let some of them go, especially when they’re not great hanging out with other people. They’re kinda’ dependent on you, aren’t they? You’re their centre, really. I admit you were for me too, back then.

I used to look up to you a lot, like an older brother, I guess. I couldn’t wait to hear your stories and latest adventures. The genuine excitement and anticipation I used to feel, knowing we’d be meeting up. I do miss some of that magic.

But things change. I understand, for you, when you got married the focus changed, didn’t it? Responsibility and all that. To be fair, it’s unrealistic to expect things to stay exactly the same once you’re married. It just doesn’t sit right if you try to keep doing what was accepted in the past, when the present is no longer the same. I hope that’s working out for you, mate.

Anyway, maybe we’ll catch up soon. Feel free to swing by if you’re ever in the neighbourhood. I know you’re a popular fella, so no pressure, especially as I see you’ve got a whole lot of new friends since we last hung out. That’s cool. Nothing stays the same does it?

Give my love to your aunt.